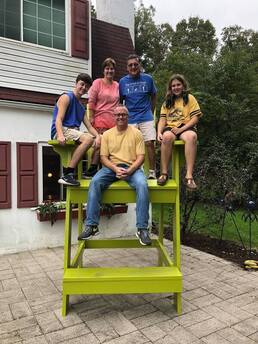 Aimee is originally from Somerset County, but moved to the Lancaster area in the spring of 2000. She has worked in the medical field for 16 years as a clinical medical assistant. But quit in August 2010 to concentrate on the running of Hobby House Retreat. Previously she had coached volleyball for 13 years. It was through volleyball that she met her husband Curt.

Curt is originally from York, PA. He is an eighth grade math teacher at Penn Manor High School but also works full time at Hobby House Retreat! He was the head volleyball coach at Penn Manor High School and then hired Aimee as his assistant. They love to share the story of what the athletic director told Curt about Aimee. He said "if she looks as good as she sounds not only have I found you a volleyball coach but I have also found you a wife." I guess he knew what he was talking about.

The Snelbakers have two very social children. Cameron, their son, was born in February 2003 and Alexis, their daughter, was born August 2006. The kids spend a great deal of their time at Hobby House Retreat either helping out or playing outside. So most likely you will meet some or all of the family during your stay.

Aimee also loves animals and has a dog and three cats - one of which was rescued from Hobby House Retreat.